The Ash tree is a beautiful tree with long feather-like compound leaves.

Ash wood is almost pure white, with a close grain; it is pliable and exceptionally tough. 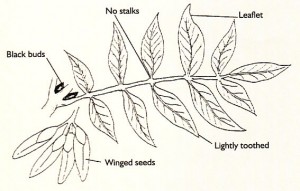 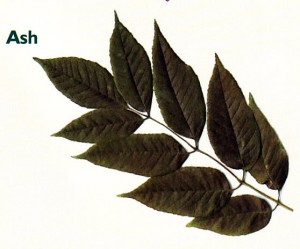 Ash trees were of massive importance to our Viking settlers; they were the symbol of the life-force. The Vikings believed that Odin carved the first man out of a piece of Ash wood. The world tree or’Yggdrasil’ was a massive Ash whose roots touched the under worlds of the giants, dwarves and Hel, and its branches stretched to the highest realms of Asgard. Its trunk resided in Midgard or the realm of man.

It is also traditional to burn a faggot of Ash at christmas. A faggot is a bundle of Ash sticks bound by hoops of Ash. Traditionally, all members present must finish their drinks when a hoop snaps. Burning Ash logs is said to cleanse a room of evil.

The Ash is easy to identify even in winter because of its black buds, and it often retains some winged seeds or ‘keys’ through the winter.