Windmill open days. The Friends of Bidston Hill open Windmill to the public at 10am until 12 noon on the first Saturday of every month from April to September.  Unfortunately, in 2019, the 7 September opening had to be cancelled because we didn’t have enough volunteers to open it safely. There were two additional openings for National Mills Weekend (on Sunday 12th May) and Heritage Open Days

Mayday Sun-upping. Every year, at dawn on May Day, we assemble at the viewpoint (the spot with benches on both sides of the ridge and fine views of Liverpool and North Wales) dawn on May Day every year to watch the Mersey Morris Men and the Mockbeggar Morris dance the sun up on Bidston Hill. This year, the sky was overcast and it was hard to tell exactly when the sun came up, but we do know it worked!

AGM. Our Annual General Meeting took place on Wednesday, 29th May at 7pm at Bidston Observatory.

The Bidston Hill Family Open Day took place on Sunday 13th May (10am to 4pm), during National Mills Weekend. The Windmill opened from 11am through 1pm, and so did the Lighthouse and Observatory. There were various other events throughout the day for the whole family, including guided walks, Punch & Judy shows, and Viking re-enactments. and much more for the whole family.

We had to cancel the spring clean of Bidston Hill cancelled due to inclement weather. It was to take place on Sunday 4th March 2018, as part of the Great British Spring Clean.

The Friends of Bidston Hill were represented at the Wirral History and Heritage Fair, which took place on Saturday 10th March at Birkenhead Town Hall, Hamilton Square.

On Friday 11th August, the Mayor of Wirral raised Bidston Hill’s Green Flag for another year.

We had a family picnic on Saturday 8th July to celebrate our parks and green spaces. More information.

Our Annual General Meeting took place during the afternoon of Monday 15th May. Proceedings started with a free guided walk along the Bidston Hill Heritage Trail at 12:30 pm. The AGM itself folled at 2 pm, including election of office bearers, and an illustrated lecture on “Viking Wirral and the search for the site of the Battle of Brunanburh” by Peter France.

Ghost Stories were told on Bidston Hill on Halloween, Monday 31st October at a secret location. About twenty participants partook of hot chocolate and mulled wine around an open fire.

Our Teddy Bears’ Picnic took place on Friday 2nd September, at 12 noon at Tam O’Shanter Urban Farm. Families enjoyed a bear hunt in the woods, a nature treasure hunt and a picnic.

On Saturday 28th May, Stephen Lyus led a walk through the Rhododendrons of Park Wood, which were in full bloom.

Our Annual General Meeting took place on Tuesday 24th May in the evening. Proceedings started at Tam O’Shanter Urban Farm at 7 pm. After the business of the AGM, guest speaker Ken Clarke told us all about the Windmills and Watermills of Wirral.

Bidston Windmill was the only mill in Merseyside to open to the public during  National Mills Weekend. We opened on Saturday 14th May, in addition to our normal opening on the first Saturday of the month.

It was worth getting out of bed to witness the Mersey Morris Men and the Mockbeggar Morris dance the sun up on Bidston Hill on May Day. 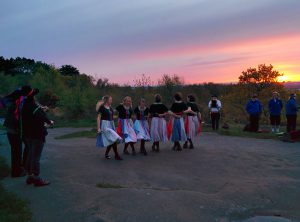 On  Saturday 5th March, 25 volunteers took part in an all-day Spring clean of Bidston Hill and Flaybrick Cemetery as part of the nationwide “Clean for the Queen”  weekend.

Rain forced us to re-schedule our Teddy Bears’ Picnic  for Friday 28th August 2015 at 12 noon, because teddy bears don’t like to get wet. Admission was free. We had a bear hunt through the woods and a nature treasure hunt.

Our Midsummer Family Picnic took place on Saturday 20th June at Tam O’Shanter Farm. Activities included a Nature Treasure Hunt for the little ones and a Spiral Dance for all ages.

We ran three free guided tours of the rhododendrons and trees of Bidston Hill’s Park Wood on Saturday 25th April, Saturday 16th May, and Saturday 30th May 2015.

Our Annual General Meeting took place at 7.00 pm on Tuesday 12th May 2015 at Tam O’Shanter Farm. The current office bearers were re-elected. The meeting finished with a fascinating illustrated talk on Bidston Lighthouse by Stephen Pickles.

There were four performances of  Robin Hood: The Panto presented by Off-Book Theatre, on 26th and 27th August 2014.

Our first Teddy Bears’ Picnic for 2014, on Friday 30th May at 1pm, was a great success. The second, originally scheduled for Friday 29th August at 12 noon, had to be cancelled because of rain.

During 2014, Bidston Lighthouse  opened on the same days as the Windmill, from 10:30 am to 1 pm, giving people the opportunity to visit both on the same morning. Guided tours of the lighthouse tower. Fantastic views from the lamp room. Admission was free for members of the Friends of Bidston Hill (£5 per family per year).

Bidston Bounty. Friday 20th June 2014, 18.30 – 20.00, funded by big lotto. Participants enjoyed a unique look at Bidston Hill and the bounty that can be found there, led by Keith Matthews, bushcraft and woodcraft tutor and Bidston’s Ranger.

A Spiral Dance to celebrate midsummer took place on the field adjoining the car park at Tam O’Shanter Urban Farm on Saturday, 21 June 2014 at 2pm.

Back to the woods, Relaxation and Bushcraft. Not all those who wander are lost. Saturday 21st June 2014, repeated on Sunday 22nd June, at 10am – 3pm both days. Funded by big lotto, this was a chance to have a go at some woodland skills: fire by friction, den building, puting up a shelter, bark crafts and relaxation techniques. Led by Keith Matthews, bushcraft and woodcraft tutor, and the Ranger and forest school leader, Nic.

The Mersey Morris Men and the Mockbeggar Morris bravely danced on Bidston Hill at dawn on  a wet and miserable May Day.

Our good and knowledgeable friend Stephen Lyus led us on three guided walks through Park Wood on Saturday afternoons, 26th April,  24th May, and 28th June 2014. These were great opportunities to learn about and identify the various trees on the hill, especially the early- and mid-flowering Rhododendrons, and gave a fascinating and interesting insight into this subject. Unfortunately, the late-flowering Rhododendrons were about three weeks early this year, and had finished by the last walk. Next year we’ll run the three walks closer together. The events were free of charge.

Bidston Windmill opened for National Mills Weekend, on Saturday, 10th May 2014 from 10 am until 12 noon.

On Tuesday, 25th March, 2014 it was exactly 100 years since King George’s Way was opened. There was a ceremony at 2 pm to commemorate the event.

We held our second annual Halloween Ghost Walk on Saturday 26th October 2013. Starting at Tam O’Shanter Farm, we wandered past the haunted mill and on to the Lighthouse at Wilding Way, where a warming cup of hot chocolate awaited those who survived the ordeal. Many wore fancy dress. The wise wore waterproof clothing and sensible shoes, and brought a torch.

The Lighthouse has been opening its doors on Windmill Open Days. Admission is usually free for current members of the Friends of Bidston Hill. More information about Bidston Lighthouse openings.

Our Teddy Bears Picnic on Friday 30th August 2013 was a great success. Twenty-nine Teddy Bears were measured, weighed and issued with birth certificates. And the Teddy Bear Hunt discovered another fourteen wild bears in the woods, and invited them to the picnic.

Back to current events.