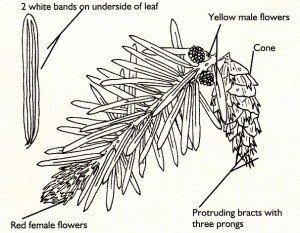 The Douglas fir was introduced into Britain in 1827 from the north west coast of America by its namesake David Douglas.

ln America the Douglas fir (called the Oregon pine) is the tallest tree growing on the coast. ln Britain it has reached heights of 55m and has a conical shape. lts bark tends to be grey to purple in colour,  fissured and corky to the touch.

The wood is of an excellent quality and polishes easily.