What is a rhododendron?

RHODO means rose and DENDRON means tree. So a rhododendron is a “Rose Tree”. Rhododendrons are evergreen plants with long, tough green leaves. They grow into large shrubs and some mature into large trees.

Rhododendrons were planted in Park Wood, on Bidston Hill between 1897 and 1933. Many of them are over a hundred years old and they can still be enjoyed today. They are not all the common purple type as many are hybrids with beautiful shades of pink, white, red and purple often with attractive markings on the flowers. The leaves provide an extra focus of interest throughout the year.

Where can I see the rhododendrons in Park Wood?

Park Wood can easily be reached by two routes:
l. From Tam O’ Shanter, walk towards the Windmill to the pedestrian foot bridge over Vyner Road North then turn left, following the path down into Park Wood.

2. From Bidston Observatory, take the stone steps down towards Eleanor Road and turn left at the first junction.

When is the best time to see them? 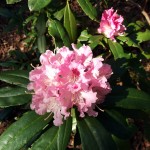 Rhododendrons flower between March and June. In April, pale pink rhododendrons can be seen, followed by the white of Cunningham’s White. The best time however is in May when the common purple R. ponticum hybrids are also in flower. Depending on the year, some continue flowering well into June.

These will be scheduled between April and June, check the Events diary for the dates.

A brief history of the rhododendron ‘hardy hybrids’

The common purple rhododendron known as Rhododendron ponticum is frequently seen on the West coast of England and Scotland as well as Wales. lt was very popular with the Victorians who planted it wherever they could. R. ponticum comes from Turkey and is known as a species rhododendron which means it is the original type and not a cross. The species rhododendrons from the Himalayas are much admired by rhododendron enthusiasts and often have more interesting leaves and flowers as well as bark. They are however less vigorous and less hardy when grown in the U.K. compared with their countries of origin, where they thrive. 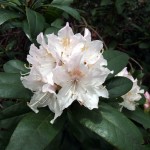 “Hardy hybrids” were bred in the mid- l8th century using ponticum and other species from Turkey (R. caucasicum), America (R.maximum, R.catawbiense) and from the Himalayas (R. arboreum, R. griffithianum, R. thomsonii). The crosses or hybrids produced are hardier than the original species and have a lovely variety of colours – white, red or pink, often with blotches or other markings in the throat, which add to their beauty when see close-up.

R. ‘Cunningham’s White’ is a cross between R, caucasicum & R. ponticum album. This hybrid is very tolerant of pollution and was widely planted in city parks during the 19th and 20th centuries. There are many specimens of R. Cunningham’s White in Park Wood.