Focus Point 9 on the Heritage Trail 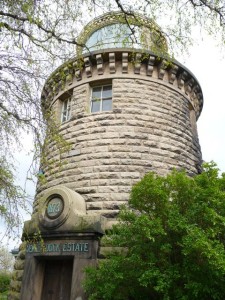 Bidston’s first lighthouse was built in 1771 as a replacement for a previous lighthouse situated a quarter of a mile out to sea at Leasowe. The remaining lighthouse at Leasowe (which still stands today) and the new lighthouse on Bidston Hill were known as the “Sea Lights”. Together they provided a leading line to guide ships through the Horse Channel, a safe passage between the treacherous sandbanks of Liverpool Bay. The building was 55 feet high and had five floors. The top floor was the lantern room which contained a single parabolic mirror (a bowl-shaped mirror which focuses the light from the lamp into a powerful beam) 12 feet across. The parabolic reflector was invented by William Hutchinson, Liverpool’s Dockmaster. Bidston’s reflector was the largest of its kind and one of the first to be installed in an operational lighthouse. The lantern burned a gallon of oil every four hours and could been seen twenty-one nautical miles out to sea.

In 1858, the newly established Mersey Docks and Harbour Board took over the Lighthouse, and soon amalgamated the lighthouse with the new electric telegraph service, which replaced the earlier Liverpool to Holyhead semaphore-based telegraph.

After a century’s service the lighthouse was demolished, and replaced by a new building in 1873. The current lighthouse was built out of local stone with a green conical roof, and the range of cottages housed three keepers and their families. The lamp, a state-of-the-art first order lens, was situated on the fourth floor.  The lamp shone every night for forty years until it was put out for the last time at sunrise on the 9th of October, 1913.  By this time, the sandbanks in Liverpool Bay had shifted so much that the Horse Channel was barely navigable – larger shipping now used the Queen’s Channel instead, which was marked by navigational buoys.

The lighthouse cottages were used for accommodation and offices during the twentieth century, but the lighthouse itself fell into disrepair. Some much-needed repairs were made in the year 2000, as part of a Millennium Project.

The lighthouse is now privately owned. It is often open to the public at scheduled times. There is no public access to the lighthouse and its grounds at other times; please respect the owners’ privacy, just as you would expect others to treat your own home.