Focus Point 5 on the Heritage Trail 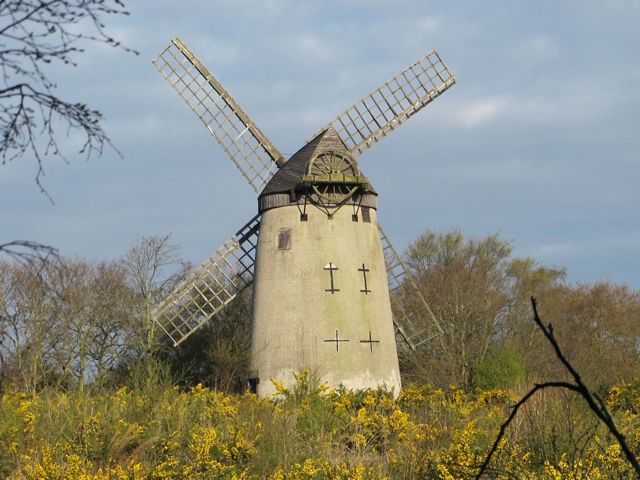 The windmill on Bidston Hill is mentioned in an early manuscript dated 1609 and may have been there as early as 1596. It is next mentioned in the Kingston map of 1665.

The mill of 1665 was a “peg mill”.  It was destroyed in 1791 during a gale. In the high winds, the sails revolved so fast that the friction caused the machinery to ignite!

In 1800, a new “tower mill” was built from brick to replace the peg mill.  The tower mill ground corn to flour for 75 years. Situated on top of Bidston Hill, it was ideally placed to catch the wind, but getting to and from the mill caused no end of problems for cart drivers. The windmill could produce 122 lb (about 51 kg ) of flour every 3 to 5 minutes (depending on the wind speed).

In this style of mill the top or ‘cap’ can be rotated through 360°, so that sails can follow the direction of the wind. On the back of the mill you can see the large wooden chain-wheel, which was used to turn the roof slowly around using a rack and gear system.

The last miller to work the mill was Mr Youds. Although safety concerns were not as important in the 1800s as they are today, the windmill did have one important safety feature: an extra door! One of the doors would always be clear of the rapidly turning sails, which could reach speeds of 60 miles an hour on a windy day. Unfortunately one of  Youds’ predecessors forgot which door to use, and went out through the wrong one. He was struck by one of the four heavy sails and was killed.

During the 1890s, Bidston Hill was purchased by the Bidston Hill Committee from Lord Vyner for public use and in 1894 the windmill was restored by a Mr R. S. Hudson. The Metropolitan Borough of Wirral carried out more remedial work over the years until 2004, when the windmill was closed for renovations. The roof was repaired in February 2006. The windmill is now an educational resource.

In 2018, the Friends of Bidston Hill open the windmill to the public on the first Saturday of every month from April to September inclusive, from 10 am to 12 noon. The windmill will also be open for National Mills Weekend on Sunday 13th May  at the later time of 11 am to 1 pm, and again on Saturday 15th September for the Heritage Open Days (10 am to 12 noon). Last entry is 15 minutes before the advertised closing time. There is a minimum height restriction for access to the higher floors (1.06m). Children under 11 years old must be accompanied by an adult at all times. During the winter months, when hibernating bats are in residence, the windmill is closed. See our events page for the latest information about windmill openings and other events on Bidston Hill. 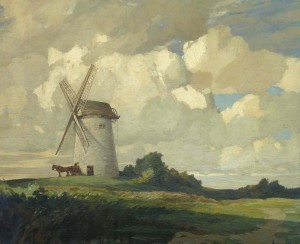 Bidston Windmill by Joseph Owen, oil on canvas. From the collection of Dick Bradshaw.