Focus Point 1 on the Heritage Trail 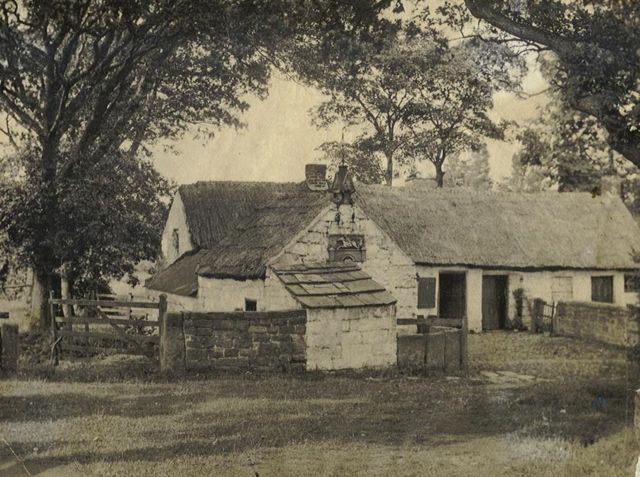 Tam O’Shanter Cottage was built about 300 years ago using local stone and reeds. It is believed to be a heath squatter’s cottage. The law of the day stated if a lodging could be built and a fire lit in the hearth in three days the property could be lived in for free!

As far as we know it had no particular claim to fame until 1837 when Richard Lee, the occupier at the time, embellished the building with a carved stone slab depicting a scene from Burn’s poem “Tam O’Shanter”. A list of the farms on Bidston Hill from 1840 tells us that Tam O’Shanter farm covered approximately 6 acres.

The building has had its share of disasters. It burned down in 1954. The roof was destroyed by vermin in 1965 and was repaired, only to burn down again in 1975. The Council decided it was too damaged to repair and suggested demolition. But Birkenhead History Society came to the cottage’s rescue in 1975, and built a field study centre.

In May 1977, the farm accepted its first school visit. Later, in 1986, the Wirral Urban Farm Association was formed and the four acres around the cottage were developed as an urban, or city, farm.

The farm is open to the public from 9.30 am until 4.30 pm every day of the year except Christmas Day. Admission is free. The farm depends on grants and public donations.