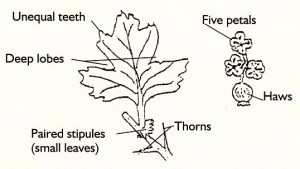 The hawthorn, quickthorn, whitethorn, mother die or May was common all over the British Isles in hedgerows and as intruder-proof fences. Sadly this beautiful plant has been replaced by barbed wire and electric fences. As its name suggests the hawthorn has sharp woody thorns throughout its branches. Hawthorns can grow to around 45 feet but are often layered into hedges well before they reach these lofty heights.

The hawthorn flowers in May and shortly afterwards produces bright red ‘haws’. Like whitebeam’s berries, haws were often preserved in a jelly and taken on long voyages to prevent scurvy.

Unsurprisingly in country areas, the destruction of a hawthorn was considered to invite peril and to bring the blossom indoors was to invite disaster. ln fact the hawthorn is considered to be the most unlucky plant by a long stretch. The hawthorn blossom smells of death, a smell well recognised in olden times when corpses were often laid out at home before burial. lt was common for mothers to force untruthful children to eat ‘haws’ and the number of lies they had uttered that day could be discovered by the number of black bits in their teeth (which in most cases would be considerable).

Chemicals derived from hawthorns are used in heart medicine and in anti-spasmodics and sedatives.