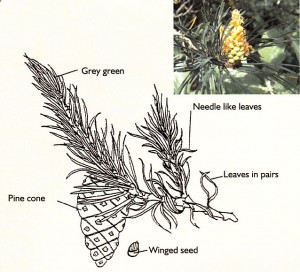 Scots pine is the only large conifer native to northern Britain, having re-colonised the poor rocky soils left after the giant ice sheets of the last ice age retreated. It specialises in clinging to poor soils and infertile lowland sands. The Scots pine’s winged seeds make it an excellent coloniser of heaths, moors and dunes.

Scots pines produce cones which take 3 years to ripen and release their seeds. Their main identifiable features are their small buds and blue-green paired needles. The male flowers are bright yellow (see above) and the female flowers are smaller, found in pairs, and crimson in colour.

The wood has commercial value as it is strong, soft and easily worked and is still moved in places by traditional methods using rivers and lochs. The Scots pine was a major source material for: