Sacks of grain were brought in on the ground floor; they were then hoisted using the sack hoist. The sack hoist was a large geared wheel on the bin floor connected to a heavy chain, which extended through one way doors (which only opened from pressure underneath) from the second floor or bin floor to the ground floor.

The milling process began with the turning of the sails and sweeps by the wind, this turning motion was transferred into the cap by the cast iron Windshaft. 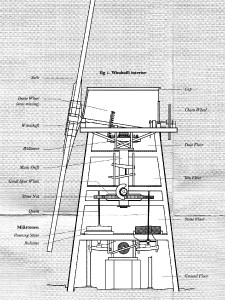 The energy produced by the turning sails was then passed through the all important Brake Wheel (missing) onto the Wallower. The Brake Wheel was a huge wheel with lots of heavy wooden teeth. The Wallower was attached directly to the main shaft. The main shaft
turned the Great Spur Wheel, which turned the two stone nuts and powered rhe sack hoist and the running stones (via the Quants).

The sacks of grain were hoisted by the sack hoist on a long chain from the ground floor, and stored here, away from rats and mice.

The grain was then poured into hoppers under the bin floor, above the millstones. The hoppers were like large boxes with a narrow downward pointing shoot.

The hoppers fed the grair by gravity down onto the slightly sloped wooden shoe on the Stone Floor.

This sloped shoe sat against the square shafted quant. The corners of the quant caused the shoe to vibrate and shook a slow stream of grain into the centre (the eye) of the top millstone (or the running stone). The running stones were turned by the cast iron quants, against the stationary bedstone. The flour may have needed several passes through the two stones (one fine and one coarse gritstone) before it was ground fine enough to be dressed by the flour dresser on the ground floor. The stones were not flat underneath; they had a series of special grooves cut into them (see The running stone). Every 100 hours the stones had to be separated because the special carved grooves needed to be  re-dressed. 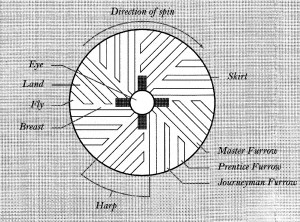 The flour dresser was a giant cylindrical sieve, designed with a perforated drum containing paddles or blades, and was powered by the wind. The flour dresser separated the seed husk and coarse flour from the finer flour. It also served to remove any large bits of grit from the mill stones that may have broken away during the grinding process.