Halloween. Seven o’clock in the evening. Well dark. Misty. I was on my way to Bidston Village and I was late. I decided to take a short cut over the hill and down to the village that way. Although I knew the hill well, I felt disorientated. Where was I? Was I still on the right track?

Then I noticed a strange light in the distance ahead of me. As I approached it, I found there was a group of ghostly figures sitting in a circle around a blazing fire in a brazier that looked suspiciously like a witches’ cauldron. 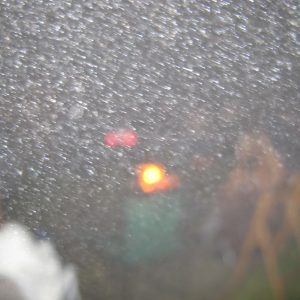 Then a voice called out: “Fear not. Hale and welcome. Come and join us. Please do.”

Although I really wanted to continue to the village, I felt compelled, as if by some magical spell, to take up the invitation. I soon found myself completing the circle around the fire. A glass of warm red liquid was pressed into my hand. In normal circumstances I would have said it was mulled wine, always popular at this time of year. But here I could not help but wonder what potion this was, what else was in it besides red wine.

I was probably right to wonder. At the very first sip, all the other figures around the fire transformed themselves into just about every sort of ghost you’ve ever seen – or at least read about. There were skeletons, transparent women in see-through nightgowns, witches – and wizards – with tall pointed hats; you know the sort, normally with stars on.

Then out of the gloom appeared the scariest ghost of all, with bony face and blooded hands – luminous blood. Apparently this ghost answered to the name of Roy, and he was no doubt attached to the story of Bidston Hill in some way, one of the many ghosts who roamed here. He was accompanied by a similarly scary assistant holding a lantern on the end of a cane who answered to the name of Angela. 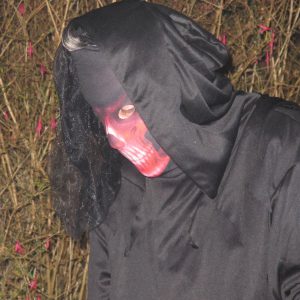 The others, including me, fell silent, suggesting perhaps that these ghosts held some special status amongst the Bidston Ghosts. Ghostly Roy then proceeded to tell stories, ghost stories of course, bringing all the other ghosts in the stories back to life. Whether these were real apparitions, if there is such a thing, or simply imagined hallucinations conjured up by the magical words of the story, was difficult to ascertain by this time, for however much of the red potion I drank, my glass would never empty. It remained full throughout the proceedings.

What happened next is a misty blur to me. Suddenly the lights had gone, the fire had gone, all the ghosts gone, and I was now on a downward slope of hill, and soon ascertained that this was one of the routes leading down to the village.

There was a light on at Yew Tree Farm.

“Can I come in, Stan? I just need to sit down before I head off home.”

“Come in, come in. Have you got any new stories about Bidston Hill? It’s Halloween, isn’t it? A glass of mulled wine, perhaps…?

written up by a MISTified Bob Hughes

This entry was posted in News and tagged BidstonHill, ghosts, Halloween. Bookmark the permalink.